In the 1980s, Gadani was the largest ship-breaking yard in the world, with more than 30,000 direct employees. However, competition from newer facilities in Alang, India and Chittagong, Bangladesh resulted in a significant reduction in output. Today, Gadani produces less than one-fifth of the scrap it produced in the 1980s. The recent reduction in taxes on scrap metal has led to a modest resurgence of output at Gadani, which now employs around 6,000 workers.

Gadani currently has an annual capacity of breaking up to 125 ships of all sizes, including supertankers, with a combined ldt of 1,000,000 tons. Although Gadani ranks as the world’s third-largest shipbreaking yard after Alang and Chittagong in terms of volume, it is the world’s leading ship-breaking yard in terms of efficiency. At Gadani, a ship with 5,000 ldt is broken within 30 to 45 days, whereas in India and Bangladesh, it takes, on average, more than six months for breaking a vessel of the same size.

Ships to be broken up are run aground on the beach under their own power, then gradually dismantled. As the weight of the ship lessens, it is dragged further onto the beach until completely scrapped. In common with many other breakers in the region, scrapping ships at Gadani use large amounts of local cheap labor with minimal mechanical assistance.

Informal ship-breaking operations occurred along the Gadani coastline prior to Pakistan's independence in 1947. After independence, a group of entrepreneurs made serious efforts to develop this casual trade into a regular industry. Despite their efforts, Gadani beach at that time lacked necessary infrastructure facilities including roads, utilities or accommodation, or medical services for workers.
Realizing the potential importance of the ship-breaking industry to the national economy, the government of Pakistan announced in 1978 a number of measures including the declaration of Gadani as a port, a reduction in import duties on ships designated for breaking-up, and a government task force to address infrastructure and logistics issues.

1969 to 1983 is considered to be the golden period of the ship-breaking industry. in the 1980s, the Gadani shipbreaking industry provided employment to over 30,000 workers directly, while over half a million people earned their living indirectly, through trade and industries which used ship scrap as raw material. It was described as the largest such yard in the world.

However, increased competition from rival ship-breaking yards in Alang, India, and Chittagong, Bangladesh, coupled with relatively high import duty for decommissioned vessels, led to a disastrous decline in Gadani output. After producing an average of one million tonnes of scrap in the 1980s, by 2001 the yard produced less than 160,000 tonnes and for ten months had no new vessel arrivals.
In 2001, the government of Pakistan reduced ship-breaking duties from 15% to 10% and offered further incentives if industry activity improved. The measures have been effective, with a modest increase in employment to a total of around 6,000 workers. 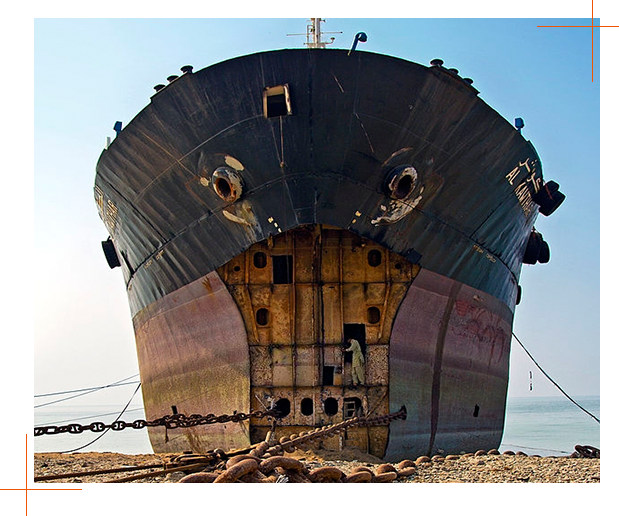